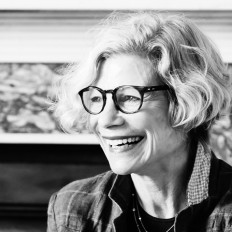 Sandy Cotter is the Founding Principal of the Centaur model which has been changing lives for more than 30 years.

Born in the USA, Sandy has been working in leadership development in the UK since 1985. Sandy has a BA is Psychology from Michigan State University and a post-graduate degree in art history from the Courtauld Institute, University of London. She was recently awarded an MSc in integrative psychotherapy from Middlesex University in collaboration with Metanoia Institute, London.

The combination of these influences gives her Centaur Leadership Development work the unique flavour – blending science with art – for which it is renowned today.

During her psychology training, Sandy was personally taught by leading figures of the Human Potential Movement in the 1970s and 1980s. Alexander Lowen, Stanley Keleman, John Pierrakos and more recently Albert Pesso are among her direct teachers.

In the mid-80s, Sandy was invited to Cranfield School of Management with a remit to deepen the focus of its key leadership programme. The result was a holistic offering for executives based on psychological depth. In 1995, Sandy became a founding director of the prestigious Praxis Centre at Cranfield which leads the field in executive development.

Over the years, Sandy has established long-term relationships with a number of prestigious blue-chip organisations including: PWC, Bosch, Visa Europe, British Telecom, Unilever and the NHS.

In this context Sandy developed her unique Centaur model based on Jungian psychology and featuring a practical application of Alexander Lowen’s Bioenergetics to the world of leadership development. Exciting new findings in the field of neuroscience within the past two decades appear to confirm the principles of Centaur within the realm of hard science.